Basting something other than a turkey

Unlike Nigel I do not baste, probably should, but dinners that are designed to be popped in the oven, generally get forgotten about and that is the beauty of them.  That magic when you triumphantly pull something out of the oven that is ready to consume and ideally in one pot to save on the washing up!

So, when I cooked this last week (I am up to date on the cooking but woefully behind on the blogging) I feel like this will be a very small labour of love.  Although I am excited about this as it gets cooked on the hob and I have an OCD type obsession of stirring something on the hob.  If there is a pot on the hob and even if someone else is cooking, I HAVE to give it a stir, or the world will come to an end... Perhaps this will work out after all...

Right enough waffling, on to basting and pages 58 - 60 of Nigel's Vol III Kitchen diaries.  The recipe is Chicken Wings with Barley and there is a picture here: 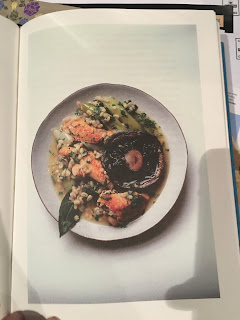 This recipe demands chicken wings which I actually bought in the supermarket.  However, I could not get fresh tarragon so had to opt for dried and could only get normal leeks not baby ones. Otherwise all was good on the ingredient front.  I have never actually cooked with Pearl Barley although have eaten it plenty of times in my mother's and grandmother's stews.

As the leeks were quite large I did rings instead of cutting them in half: 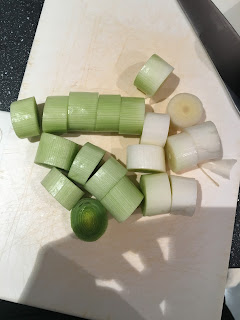 My chicken wings browned nicely but I cannot help feeling this meal would have been more satisfying with chicken thighs.  Whilst wings cook quickly and easily, they are rather fiddly to eat. I am also not a fan of skin in these sorts of dishes.  No matter how much you crisp them up, they still seem to go soggy in the cooking juices.  I am wondering if a skinless thigh may be an alternative?  Too be honest, even a skinless and boneless thigh could work quite well if you want to remove all the hassle from eating (but where is the fun in that!)... 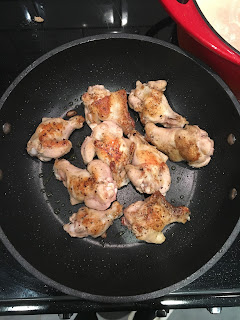 I should have clocked this before, but you cook the pearl barley in the same way you would cook a risotto, slowly, stirring on the hob (my OCD heaven), watching the barley plump up as it absorbs the liquid.  I needed quite a bit more liquid than the recipe said, but like a risotto I just ladled my chicken stock a small amount at a time to stop it getting water logged, or stock logged as it were. 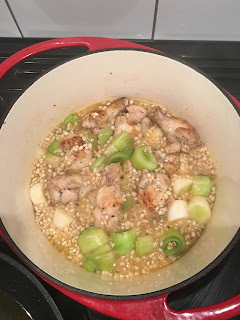 The other part of this dish and of equal importance is the field mushroom.  The big large flat earthy mushrooms that get slowly fried with smoked garlic in the chicken wing pan to soak up all those lovely juices.  It is a thing of beauty: 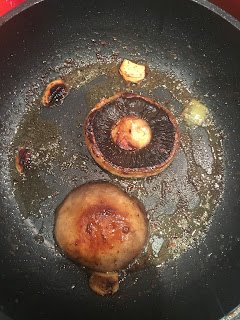 So, time to assemble the dish: 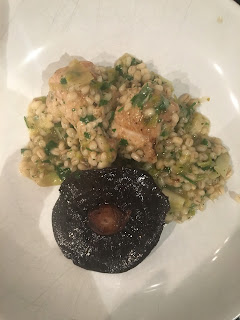 My leeks are not as prominent but my herbs are just as green.  The dried tarragon is actually of excellent quality and really lifted this dish.  It was absolutely delicious.  Whilst the recipe said it served 2, this served my husband and I for dinner with a left over portion for my lunch the next day.  My husband and I loved the pearl barley as an alternative to rice in a risotto and we will definitely do this again.  Barley is a good source of fibre, is very soluble and can help lower cholesterol, so some health benefits too, as well as a delicious nutty taste!