Confession 3000 - I do feel like I am constantly confessing to things I have not done for this blog.  I am a little behind.  It is the puddings that cause problems!  We do not really eat pudding in this house, unless we have guests and even then we tend to have cheese.  We are all cheese fiends in this house!

So, there are two puddings currently uncooked.  I will get to them.  Hopefully this weekend.  Both are ice cream and both require an ice cream maker and I do not have one.  I have debated buying one, but between the mixer, the coffee machine, bread maker, toaster, juicer, blender, I cannot face another piece of kit cluttering my kitchen or my cupboards.  Also in the spirit of winging it, not everyone has one and so when I get round to it I am going to give it a bash without!

I cook both on March 13 as football match snack food.  I am sure that this is what Nigel had in mind...

I cooked the Chicken with Yuzu and Sesame first.  Nigel has no picture for this recipe so time to use the imagination.  Essentially this is making the marinade, mixing it with the meat, leaving it for a bit and then grilling it.  In the words of a famous meerkat, simples!

I have no pictures of the marinade but have a really rubbish one of the chicken grilling.  This has to be the worst blog picture to date: 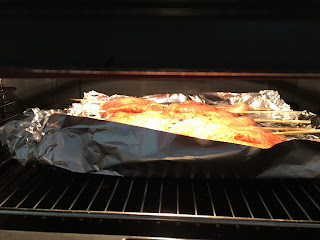 The yuzu juice in the marinade has a wonderful citrus flavour.  If you cannot get this, I think you could probably use some jif lemon.  It does not have the complexity of flavour but I think it would still work.  The thing that really makes this dish is the shichimi togarashi.  You only need half a teaspoon but it provides more of that citrus flavour but also a real heat.  My two year old loved this chicken but stuck is tongue in some water after every bite.  It was clearly a pleasure pain thing for him!

I served the chicken on the skewers to the waiting football fans who were engrossed in the West Ham vs Man Utd game. 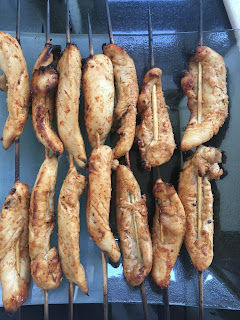 They were absolutely delicious and were really really moist and did not need any other sauce.  Perfect for eating on my mum's beige sofas...

On to the Grilled Fish with soy and sesame.  Once again I opted for the fabulous frozen mackerel fillets (apologies to my lovely fishmonger!).  I cut mine into small pieces to help with the finger food for the awaiting football fans.

Again you make the marinade which is very simple.  All with ingredients very easily purchased from the supermarket. 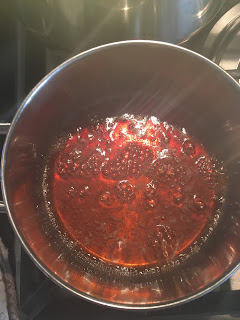 You pour this over the fish and top with sesame seeds and again pop under the grill: 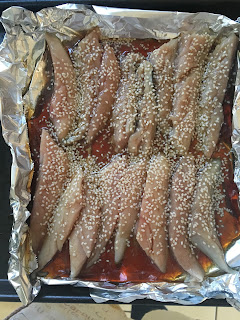 The finished product is here and they were absolutely delicious.  Again really soft and succulent and again my two year old was a fan, as were the rest of the football fans.  It was a shame that the result did not quite go our way but at least our home crowd was satisfied... 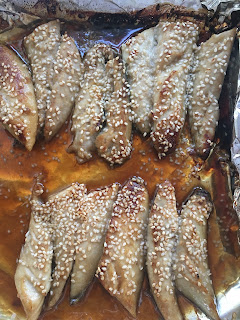