Turn the other Cheek

Rule bending alert!  On January 15 I should be cooking the Pig's cheeks with apples and cider with Kale Colcannon from pages 16 - 18 of Nigel's diaries (http://www.nigelslater.com/the-kitchen-diaries-volume-iii-_bk_36).  However, I am still working full time and this takes 3 hours to cook so the likelihood of me cooking this on Friday night is slim to none! Also this feels like a Sunday night supper after a hat trick of soft play parties.

This is what I am aiming for (very grateful for the picture on this one!). 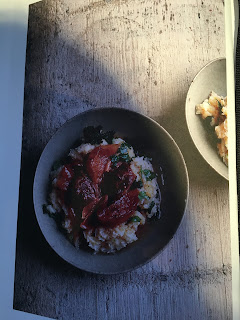 I will be honest, I am not sure about this dish.  This is odd as this is the girl who grew up loving her grandmother's stuffed hearts.  However, a cheek, I don't know, I seem to have a mental block against it.   Further, I throughly dislike celeriac.  The first time we had it was in a veg box.  My husband and I came home three sheets to the wind one Friday night and my husband opened the box declaring there was a brain in it.  Accordingly, this supper feels like Hannibal's finest, cheeks with a side of brain. However, in these circumstances, it is mind over matter and I have started this journey with Nigel so I will finish!

I was sort of unable to get Pig's cheeks.  I did ask my butcher and he could get them but only in larger quantities as there is currently not much demand for them.  As you read on you will see why I say currently.  However, he had Ox cheeks in stock so I bought two, not knowing quite how enormous they are... 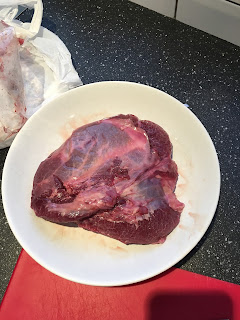 I had previously researched alternatives to pig cheeks just in case and Ox cheeks appeared to be a legitimate substitution so I went for it.  Surprisingly expensive at £16 for the pair.  As you can see they are sizeable and all meat but I always assume that the less common cuts will be at bargain bucket prices.

I thought about cutting it into smaller chunks as Nigel's recipe assumes the smaller individual pig's cheeks but it was quite hard to find the grain, so I just bunged it into the pan whole for browning.  One thing I have always noticed about Nigel's recipes, but more so since I have been cooking them with greater frequency, is how beautifully simple they are.  Despite their simplicity, they are always full of flavour and wow factor, but more of that in the moment.

After the browning and the adding of the rest of the ingredients, it then needs to go into the oven for the magic 3 hours.  This is what it looks like before it goes in: 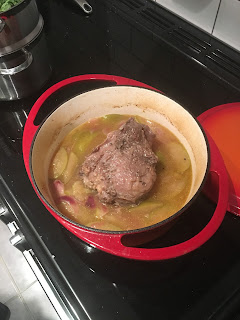 It looks slightly anaemic but partly due to the chicken stock and cider.  The meat as you will see has also shrivelled somewhat.  I must confess, at this point I am not feeling any more confident about the dish! So, in the oven it goes with a few prayers.

I must confess I have had some assistance with this dish.  I had to run some errands in the 3 hour cooking time so my husband was charged with turning the cheek at 40 minute intervals.  By the time I returned to take it out of the oven, the meat was falling part.  The transformation was amazing, from ugly duckling to a beautiful swan and my husband was already stealing the meat from the pan.  Think a rich beautiful cheeky stew! 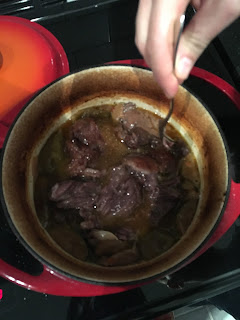 The sauce, gets reduced and in the meantime my celeriac has been boiling away.  The whole dish comes together and looks not too far from the picture: 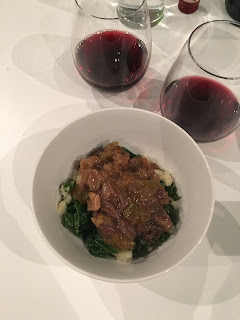 My husband LOVED this dish and had second helpings and I have frozen the rest for another supper for him.  I enjoyed it but I think my mind got the better of me.  Had I not known what the meat was I would have wolfed it down, commenting on how soft and tasty the meat is and how the sweet slightly tangy sauce slightly offset the richness of the meat.  On the upside, I enjoyed the celeriac and kale mash immensely and have officially got over my aversion to celeriac.  One out of two is not bad and I still have the other cheek in the freezer...