Another Nigel Slater night and another involving guests .  My sister, her boyfriend and my mother's cousin and her other half aka, Chloe, Robin, Great Auntie Val (don't ask) and Great Uncle Bob (ask even less).  Tonight, the expectation is high.  Nigel refers to this recipe as, 'sometimes you just want pie' and what with it being the end of a long working week and the recent cold snap, we ALL want pie.

This is no ordinary pie, this is a pie with a punch.  A peri peri punch: 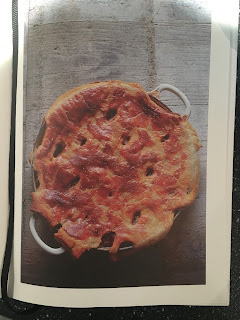 For those following the recipes it is pages 10 and 11 of Nigel's book) I actually used chicken breast in this recipe as I had some in the freezer to use.  The results were fine but I think thighs would have been better, being a tastier and more moist cut of the chicken.  I also slightly increased the quantities of everything as whilst the pie says it serves 4 - 6, there are some rather large appetites around the table this evening (mine included!).  So, three (small!) pies were made and this is the filling before the pastry top goes on: 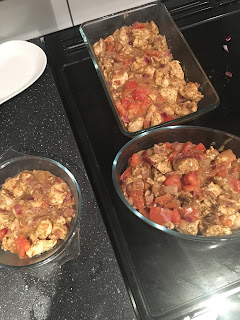 Now, this is the point where I love Nigel, he refers to using puff pastry for the crust but there is no recipe to make it and so I have assumed he used shop bought.  On this Friday night and already a couple of glasses down I am eternally grateful for this.  This is not the evening for rolling and folding!  I always buy the all butter puff pastry.  Slightly more expensive but a more natural recipe and better flavour as a result.

The pastry also causes immense debate around the dinner table.  Can it really be a pie without a pastry bottom?  Is this, 'just not a stew with a lid!' one of my guests cries!  Either way it did not end up mattering as no sooner were the pies on the table they were being served up.  I was just in time to take a quick snap of the finished article: 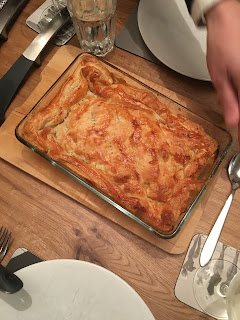 I served it with a rich creamy mash to offset the heat of the spice in the pie.  Think lots of butter and double cream.  I also served with (surprise surprise) green veg, frantically trying to get through the huge bag of kale bought last week.  Likely to be Kale soup in this household for the next few days...

The pie/stew with a lid was a huge hit.  It was comforting (anything with pastry is) but the filling was like a hidden surprise.  It was really quite spicy.  Not in a, 'I need to stick my tongue in a glass of milk kind of way'.  But in a really warming cuddle kind of way.  The celery seeds and oregano also shine through which reminded Great Auntie Val of a school dinner pie (in a good way).  I think a pie does that, it reminds you of your childhood and all that is comforting.  I also think the peri peri marinade/sauce could be used in a whole host of other recipes, I am thinking kebabs grilled on the bbq in the summer with a fresh salad.

For pudding we had cheese and biscuits (left over from new year festivities) served with this lovely wine bought from France by Robin.  A winning end to a winning meal.  A lovely family supper, thanks Nigel. 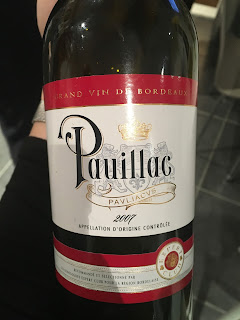 JanieCooksNigel
Posted by Little Betty at 00:34